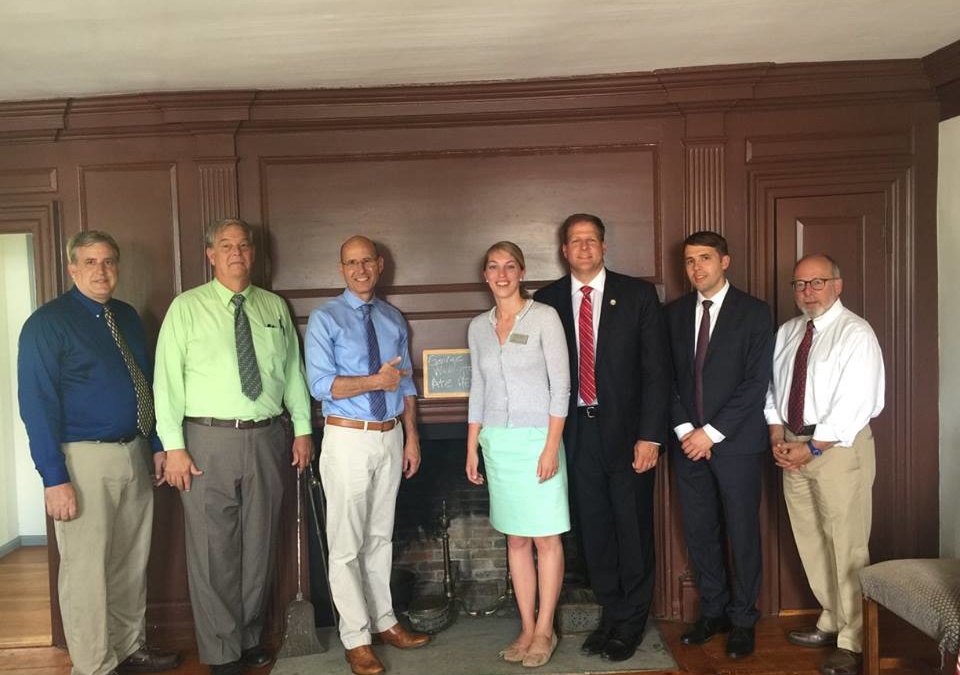 EXETER — Gov. Chris Sununu was given a “welcome home” at the American Independence Museum on Wednesday afternoon, as the museum was once the governor’s mansion in the late 1700s when John Taylor Gilman held the esteemed position. 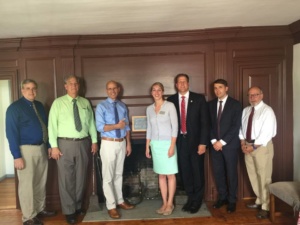 Sununu and members of the Executive Council received a personal tour of the museum and its grounds from Executive Director Emma Bray. The tour followed a breakfast meeting at the Hampton Beach Pavilion where the American Independence Museum and Society of the Cincinnati of New Hampshire were given proclamations of service from the state. The Society of the Cincinnati of New Hampshire, a nonprofit organization, founded the museum in 1991.

“We’re really excited to have them all here,” said Bray, who has been the museum’s director since March. “Obviously not only as a small museum to host them, but one that has such a direct connection to the New Hampshire government, to governors, to how our state was founded. That’s such a strong connection. A lot of our mission is connecting the past to the present and that’s exactly what we’re doing for the governor and the Executive Council today, which is wonderful.”

Sununu and the Executive Council paid close attention to the Dunlap Broadside, one of the first-ever published copies of the Declaration of Independence in custody of the museum.

Bray shared the significance of the Gilman family and their deep connection to Granite State government. Sununu and Executive Council members ducked their heads in small doorways passing through each room housing colonial artifacts and documents.

To end the tour, Bray brought the group down to the Folsom Tavern. The museum will host ‘A Beer for History’ events in the tavern beginning this month, with a different local brewer showcased each time.

Sununu, a Newfields resident, said he’d been to the museum before with his children.

“I love it,” he said. “I’m a history nut.” Sununu noted his favorite historical figure is Paul Revere.

“The fact that George Washington ate here, the fact that these buildings are so well-cared for,” he said. “It’s still in incredible shape. You learn about the Treasury, you learn about the people, you can see the actual signatures of these individuals. In New Hampshire, you can really see it, touch it, feel it. In other parts of the country you hear about this stuff and see pictures in books, but here you can physically touch it. To be like, ‘This could very well be the table Washington was eating at,’ and you’re standing right next to it.”

Sununu said destinations of interest in the state like the American Independence Museum are something his administration is trying to highlight.

“We really try to put an emphasis on cultural resources,” Sununu said. “We’ve put our cultural and natural resources together. I’m a big believer in the term we use ‘the creative economy.’ It’s everything from artisans to our natural resources to the culture and rich history we have, and selling that. That’s our asset. That’s one of the things that makes New Hampshire so special. By going out and promoting it and selling it and letting people know things like this are right here in our backyard, it’s just a way to drive tourism, drive dollars into the economy and make an appreciation for what makes the ‘live free or die’ state so special.”

“I’m honored to be here,” Prescott said. “It’s a chance to focus on the uniqueness of Exeter.” Prescott, who is a museum ambassador himself, grew up in Exeter, he said.

Prescott thanked Bray for her organization of the tour and taking the time to show the governor and Executive Council members the crucial state resource that is the museum.