These two engravings, commissioned by the Marquis de Lafayette, demonstrate the power of images, both as works of art and as political tools.

The Washington engraving, with inscription, may be considered as pictorial lobbying.  Lafayette was keen to be appointed commander of the French troops going to America and the engraving demonstrated his close personal connection to the General.  (The command was given to the Comte de Rochambeau, a veteran of the Seven Years’ War, although Lafayette was allowed to sail to America ahead of the main French forces and convey the news to Washington.)

The engraving of Lafayette commemorates his role in the final battles of the Revolution.  In February 1781, Washington gave him the command of 1200 men to fight the enemy (including the turncoat Benedict Arnold) in Virginia, keeping them occupied while the allies closed in on Cornwallis from land and sea.

The engraving of George Washington dates from 1780 and is inspired by several earlier portraits.

Lafayette commissioned the artist Charles Willson Peale (who produced nearly 60 portraits of Washington using just 7 sittings as his models!) to produce a small copy of his large Washington portrait, dating from 1776, commissioned by John Hancock.  This portrait and another one from 1772 can be viewed here at Mount Vernon’s website.

Lafayette subsequently commissioned a sketch of Washington from Pierre Charles L’Enfant, best known as the designer of Washington D.C.

He then commissioned a further portrait of Washington from a French artist.  As described by Laura Auricchio in her book The Marquis: Lafayette Reconsidered, key changes from the Peale portrait are that the painting ’emphasizes the demise of Great Britain and highlights the role of France as America’s closest ally.’  She quotes Lafayette’s description of the portrait showing Washington ‘with the French treaty and Declaration of Independence in his hand and the edicts and pronouncements of His Britannic Majesty under his feet.’

This work, by Jean-Baptiste Le Paon – a specialist in battle scenes – and published by Noel Le Mire, places Washington at a camp in the woods and adds such features as a draped table, a servant with turban, and an encampment.

The inscription below the portrait emphasized the connection between Lafayette and General Washington: ‘engraved after the original painting in the collection of Monsieur the Marquis de la Fayette.’ 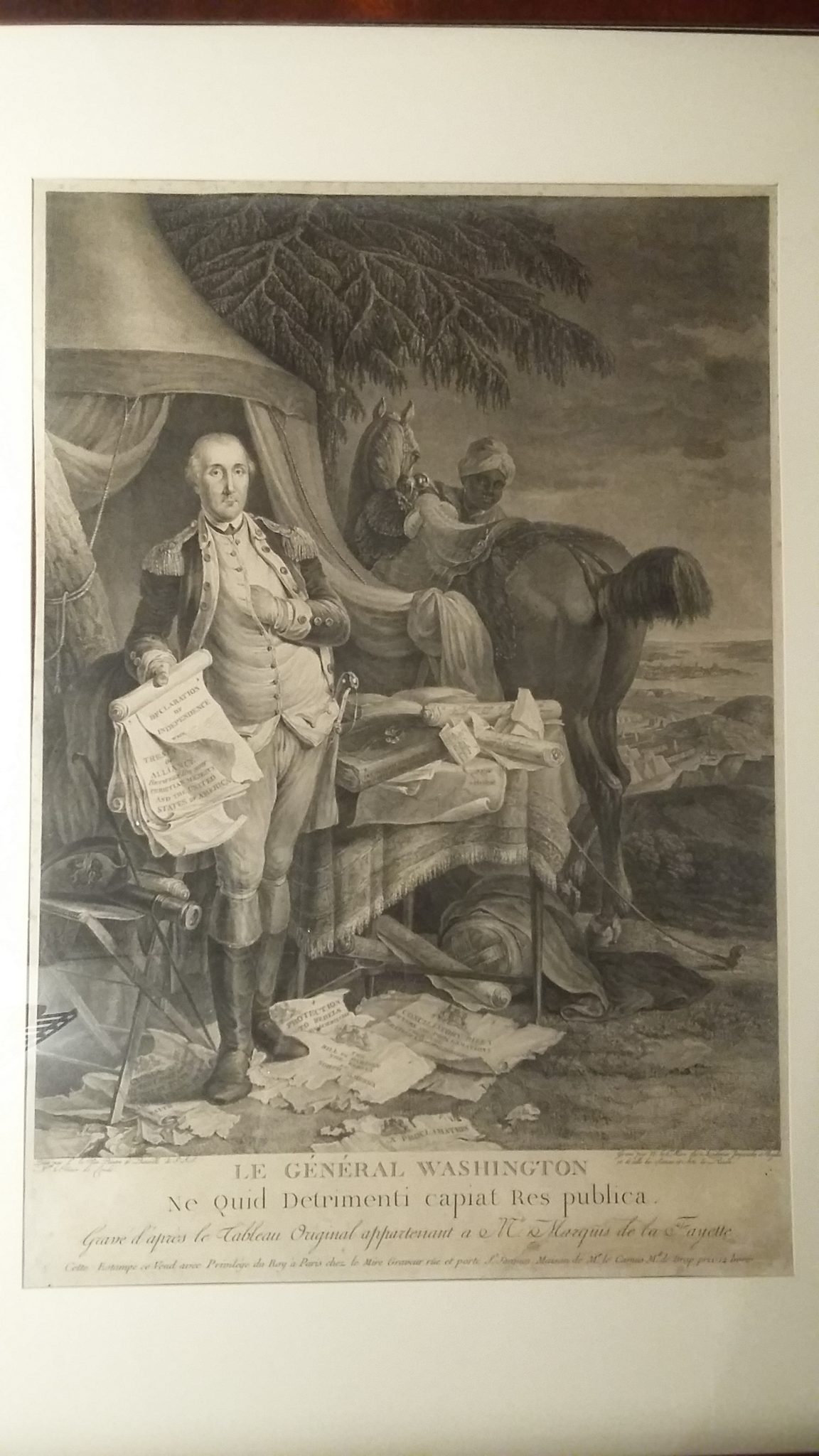 Etching of General Washington.  From the American Independence Museum Collection 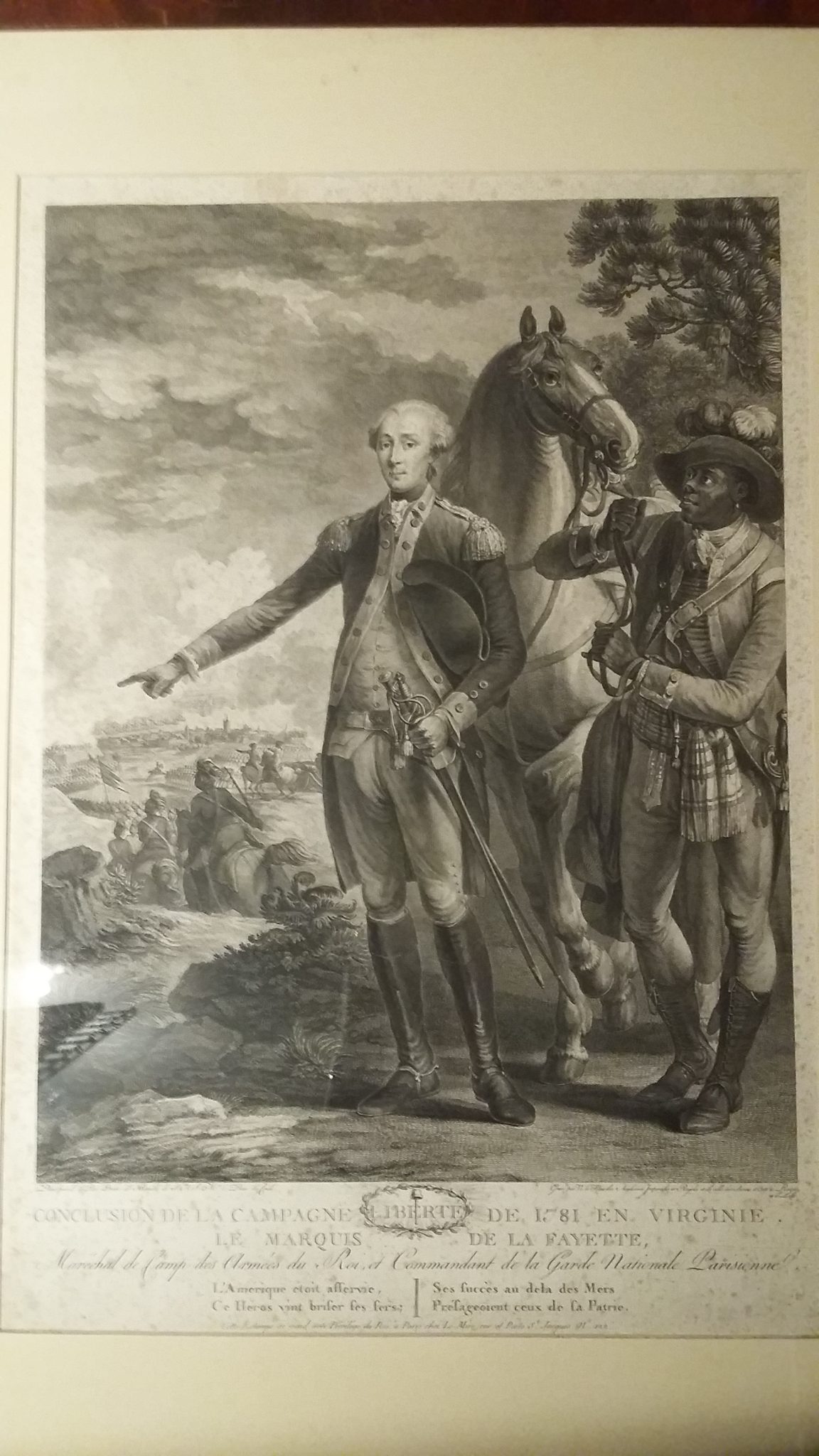 Etching of Lafayette, after a painting by Le Paon.  From the American Independence Museum Collection.

The engraving of the Marquis de Lafayette dates from 1783.  Lafayette had commissioned Le Paon to paint his portrait, and subsequently to make the engraving, which was published by Le Mire.  Intended as a companion to the engraving of General Washington, it prominently features a servant holding the Marquis’ horse and, in the background, a battle scene.  Its formal title is ‘Conclusion de la Campagne de 1781 en Virginie, le Marquis de la Fayette’.

Click here to read more about Lafayette or here to view other images of Lafayette from the Skillman Library at Lafayette College.

Le Paon and a project to commemorate the Revolution

On February 24, 1782, Le Paon wrote to Benjamin Franklin, offering his services as a painter of military scenes to commemorate the deeds of arms during the War of Independence.  He refers to his portrait of General Washington and the Companion panting of Lafayette, which he had just finished, from which he will make an engraving.  His letter, together with some interesting notes on the publication of the engraving, can be read here.

From 1824 to 1825, Lafayette toured the United States as the last surviving French General who had participated in the War of Independence.  His reception throughout the 24 states was rapturous.  More about his final tour can be read here.