L’Enfant’s design of the Society of the Cincinnati Insignia

A Badge for a Gentleman!

According to The Insignia of the Society of the Cininnati (Minor Myers, Jr., 1998), Major Pierre L’Enfant was responsible for the Society’s founders deciding on a badge – not a medal, as Colonial Henry Knox initially proposed – for individual members to purchase.  Writing to Colonel Knox, L’Enfant described a medal as ‘only the reward of the laborer and the artist, or the sign of a manufactory community or religious society’ adding that ‘a gentleman invested with any European order would be unwilling to carry a medal.’

Inspiration from France and Germany

Several examples of European insignia were well known in America and may have inspired Colonel Knox in his design for the Society. 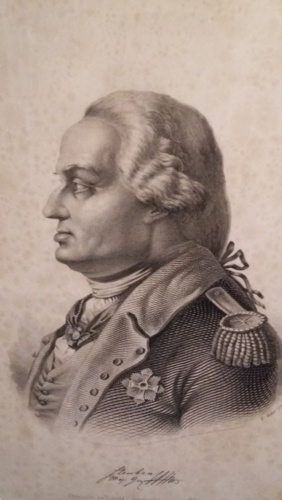 The Order of Fidelity of Baden established by the Margrave of Baden-Durlach in 1715.  Baron de Steuben, Inspector General of the Revolutionary Army, was a member and regularly wore its decoration.  Click here to see a portrait of the Baron by Charles Willson Peale wearing the Cross of Fidelity of Baden on a gold ribbon around his neck and the Star of Fidelity of Baden on the left side of his chest.  Also, click here to be taken to another Hidden Gems page to read more about Baron de Steuben and his book that organized the Revolutionary Army Regulations for the Order and Discipline of the Troops of the United States.

The Institution of Military Merit, created by Louis XV in 1759 to reward Protestant members of the French army.  John Paul Jones, sometimes called ‘The Father of the American Navy’, was a recipient.  Click here for more information on the Institution. 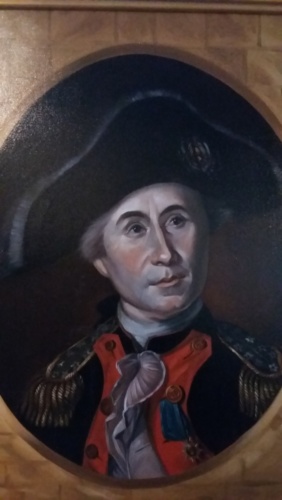 Portrait of John Paul Jones.  On Loan to the American Independence Museum from the Portsmouth Historical Society. 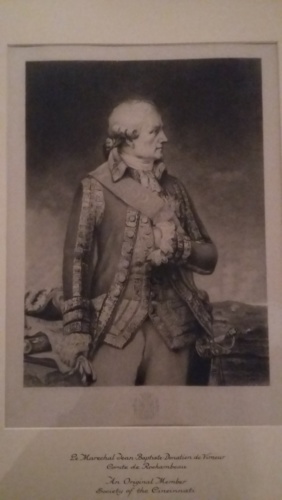 Etching of Rochambeau.  From the American Independence Museum Collection.

The Royal and Military Order of St. Louis, established by Louis XIV in 1693.  The Comte de Rochambeau, commander of the French army sent to America and given much credit for the American success at Yorktown, was a member.  Myers estimates that at least 86 French officers serving in the American army had been admitted to the order, which was open only to Catholics.  Click here for more information.

When Colonel Henry Knox outlined a plan for ‘a fraternal organization for officers of the Continental Army’ in April of 1783, he described a medal:

‘The Society shall have an order by which it shall be known and distinguished, which shall be a medal of gold or silver of a proper size to recieve these emblems, the principal figure Cincinnatus three senators presenting him with a sword and other military ensigns.  On a field in the background his wife standing at the door of their cottage near it yoked plough and instruments of husbandry, round the whole Omnia reliquit servare Rempublicam.’ (‘He gave all to save the Republic’)

‘Round the whole The name of the Society and year of its foundation.’

By May 1783, Colonel Knox had decided that the medal should be gold and ‘suspended from a blue and white ribbon, two inches wide, edged in white, descriptive of the union of America and France.’

Etching of Henry Knox.  From the American Independence Museum Collection

So, What about the Watercolor? 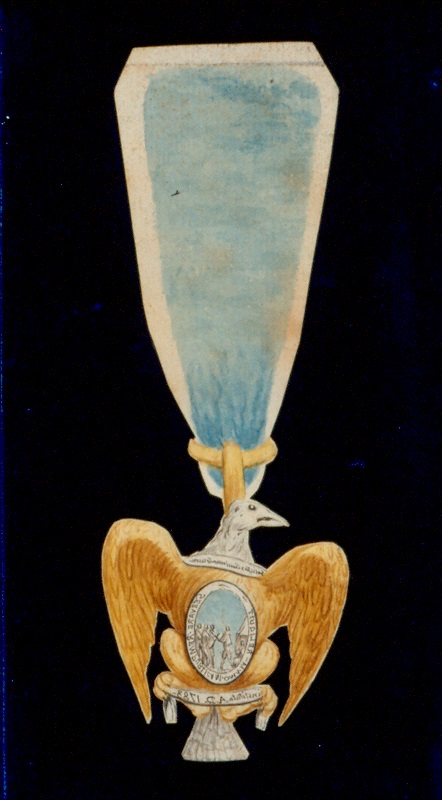 L’Enfant Watercolor of the Society Insignia.  From the American Independence Museum’s Collection

In June 1783, Major Pierre L’Enfant, a French engineer who had served in the Continental Army since September 1776, became involved in the discussions.  He had served under George Washington at Valley Forge and was on Washington’s staff from 1780 until the end of the war.  In a letter to Baron von Steuben dated June 10, 1783, he proposed the inclusion of the Bald Eagle, as the bird is ‘unique to this continent, and is distinguished from those of other climates by its white head and tail, [it] seems to me to deserve attention.’

He submitted two ‘concept designs’ to the officers of the Society and the two-sided watercolor shows the design which was chosen.  But the watercolor – L’Enfant produced one for each state society – had a specific purpose: to get orders from members before he went to Paris to have them made (General Washington ordered eight, seven ‘of the regular sort’ and one in an ‘elegant, tho not costly Stile’.)

In other words, the watercolor is an ad!

According to Myers, at least four survive.  Two of them are in AIM’s collection and one is on display in the Museum inside the glass case containing the medals of Brigadier General William E. Horton.  L’Enfant’s design went through several changes during the creation of the first insignia, most notably adding a laurel wreath around the head of the eagle.  His design was not used until the 1970s, as a special project for the New York Society. 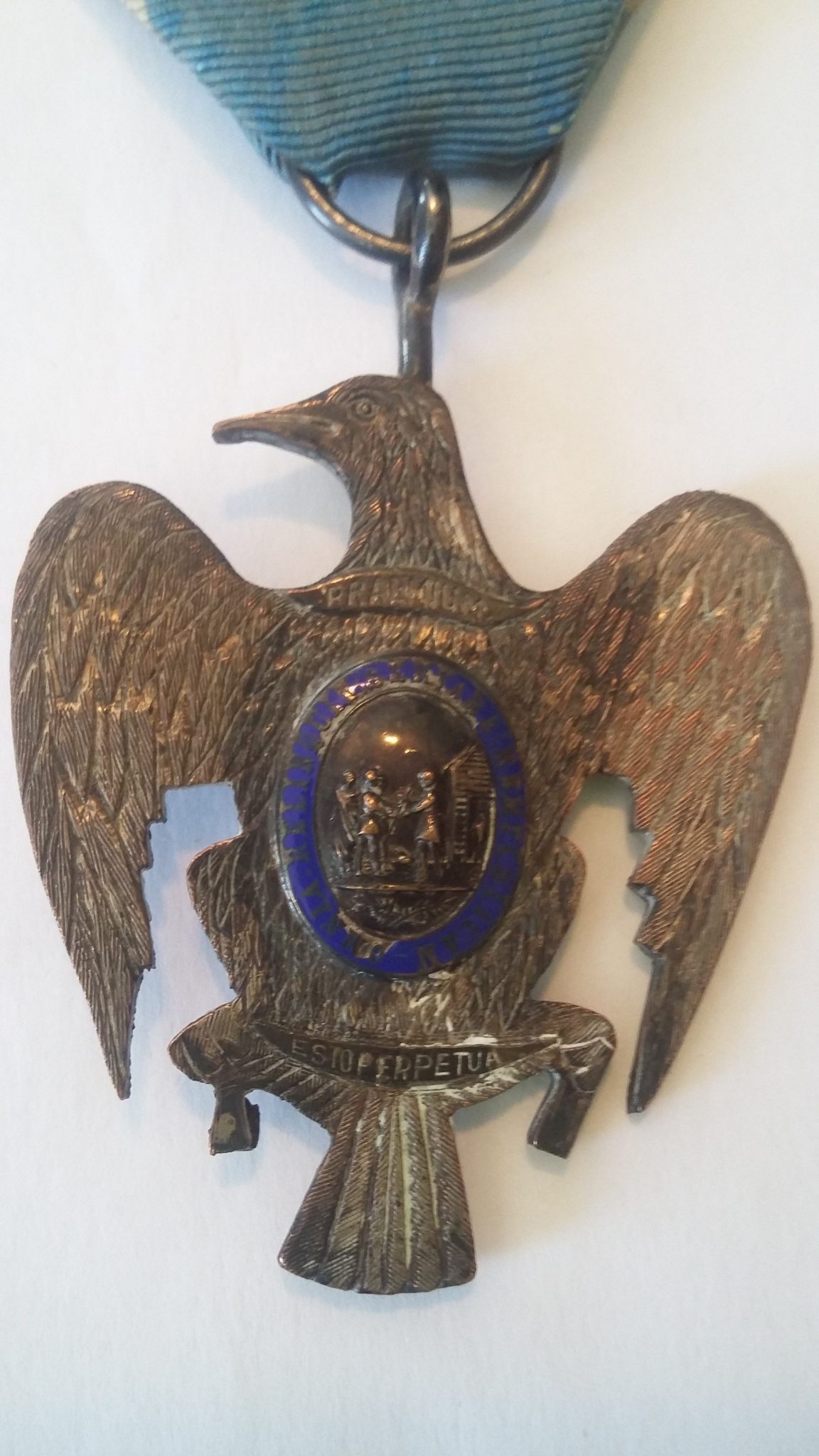 Close up of the front of the eagle.  The crest on the eagle’s chest uses Knox’s idea of Cincinnatus being given a sword while his wife looks out from their house. 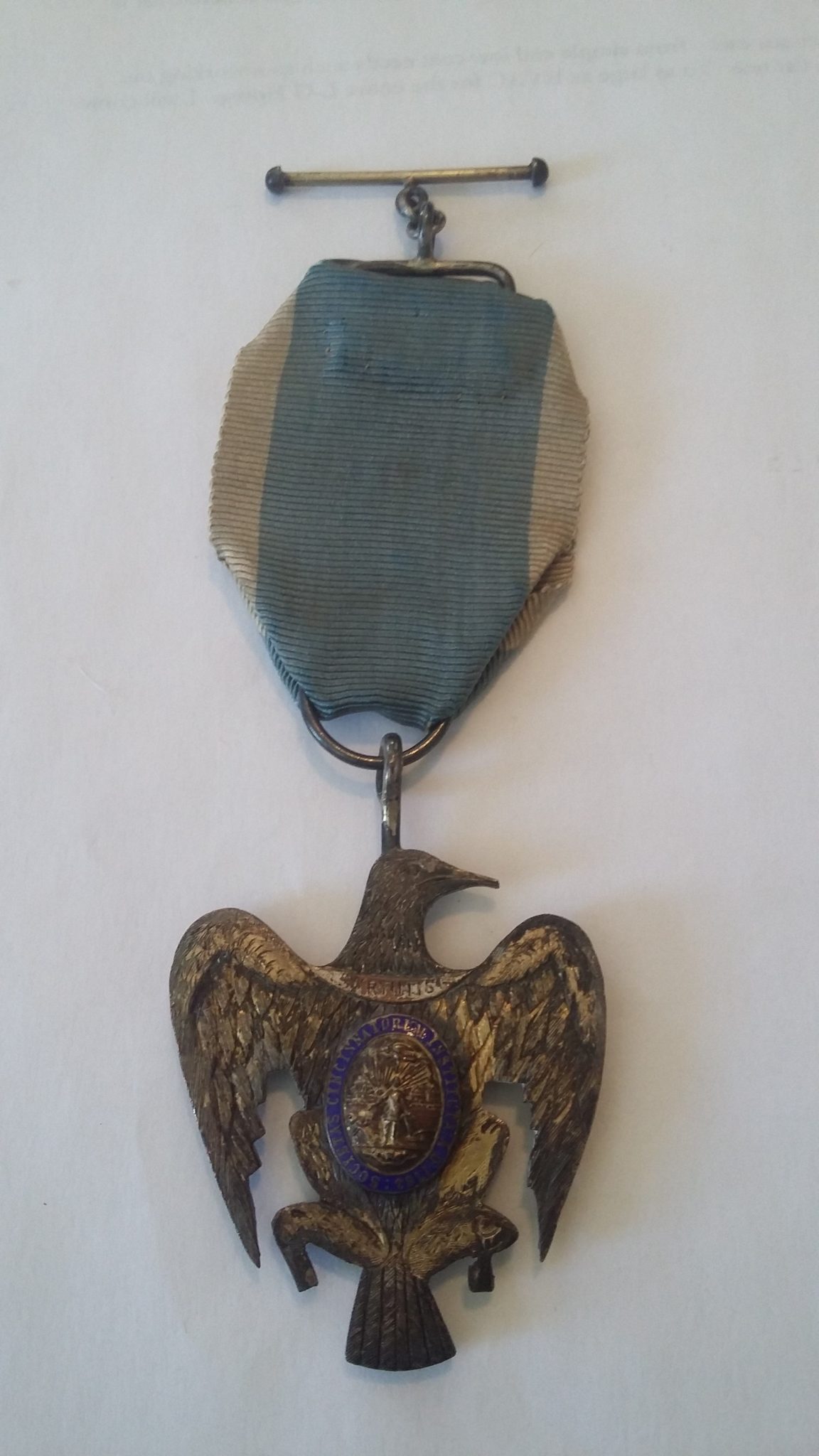 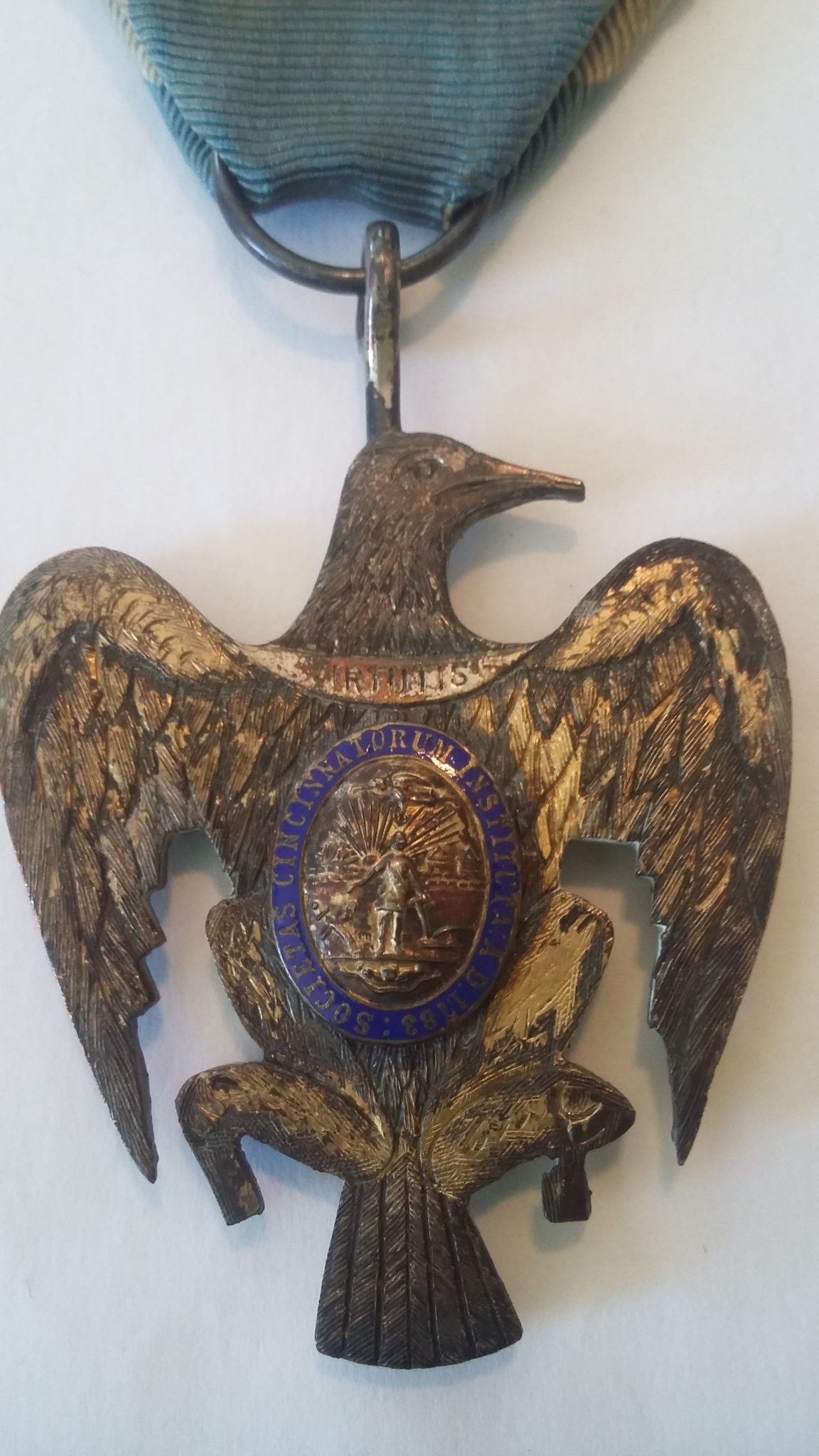 Back of the Eagle.  Again, L’Enfant uses Knox’s idea of an Cincinnatus in front of an open gate and a radiant sun.