“No bread, no meat, no soldier!” was the cry at Valley Forge – and after 1780 the job of making sure that the Continental Army had food, weapons, and uniforms fell to Colonel Timothy Pickering, elected Quarter Master General by the Continental Congress.  Alongside supplying the army with basic essentials, he was also responsible for coordinating transport for the army when it moved.
At one point, a frustrated Pickering wrote to Congress, “If any man can, without money, carry on the extensive business of this department, I wish most sincerely he would take my place.  I confess myself incapable of doing it.”  Although he referred to his position as ‘an office so burdensome and a service so ungrateful’, he remained in the position until 1785 when he finally resigned.
This Chest was in the Pickering family until 1994 and is now on display in our museum.  ‘QMG’ is carved into the center of the lid and a piece of paper inscribed ‘Q M General No. 1’ is nailed to the right side of the chest.  Made of pine wood, the chest has its original hardware and lock.  There are also remnants of the black paint on the outside of the chest, as well as red paint that once covered the inside of the chest.

This chest was most likely his personal chest, holding his correspondences, receipts, and notations about the American Army and the supplies they required or received.  It would have traveled with him as he went around the country during the Revolutionary War. 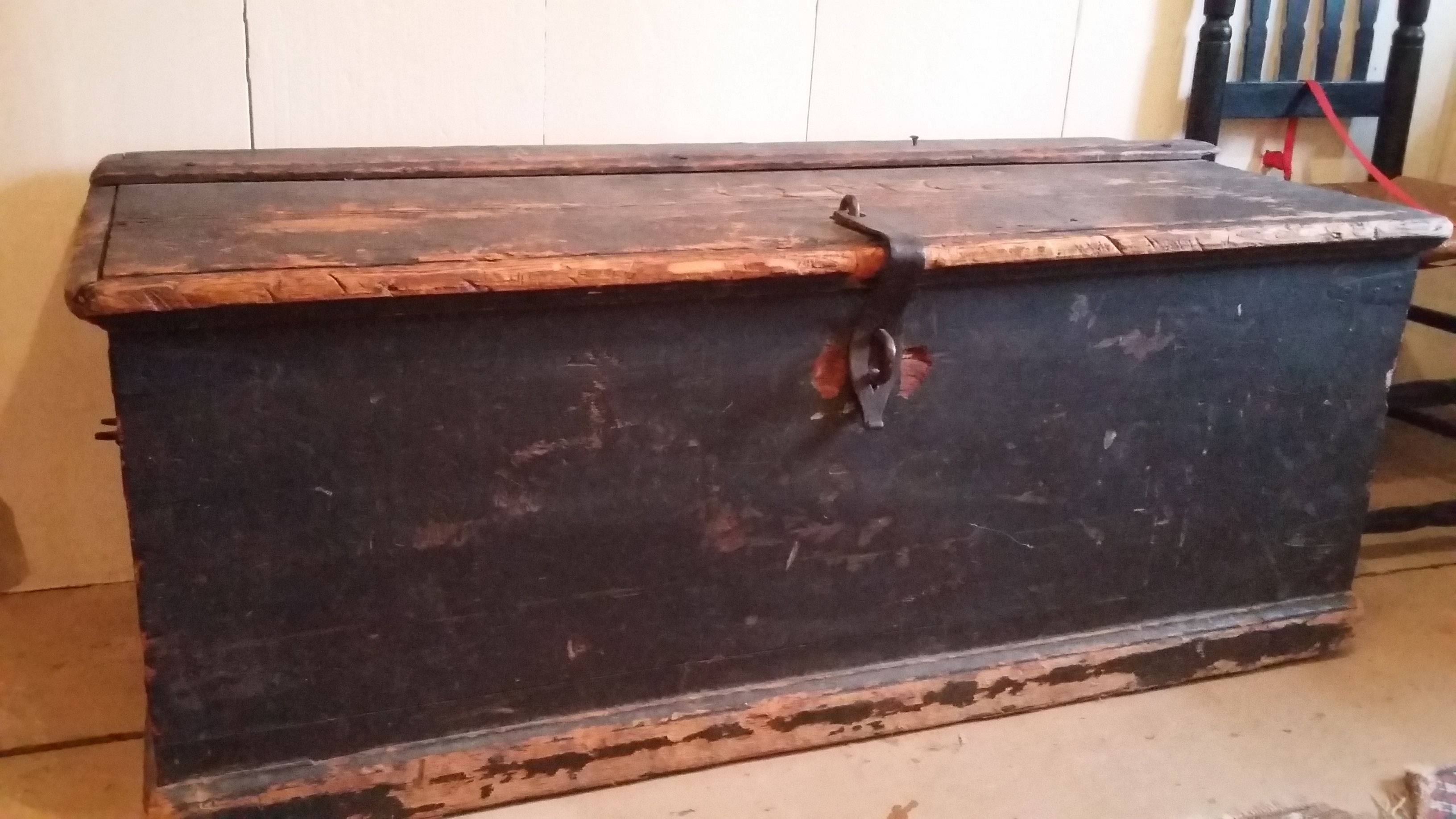 View of the front of Pickering’s QMG chest. 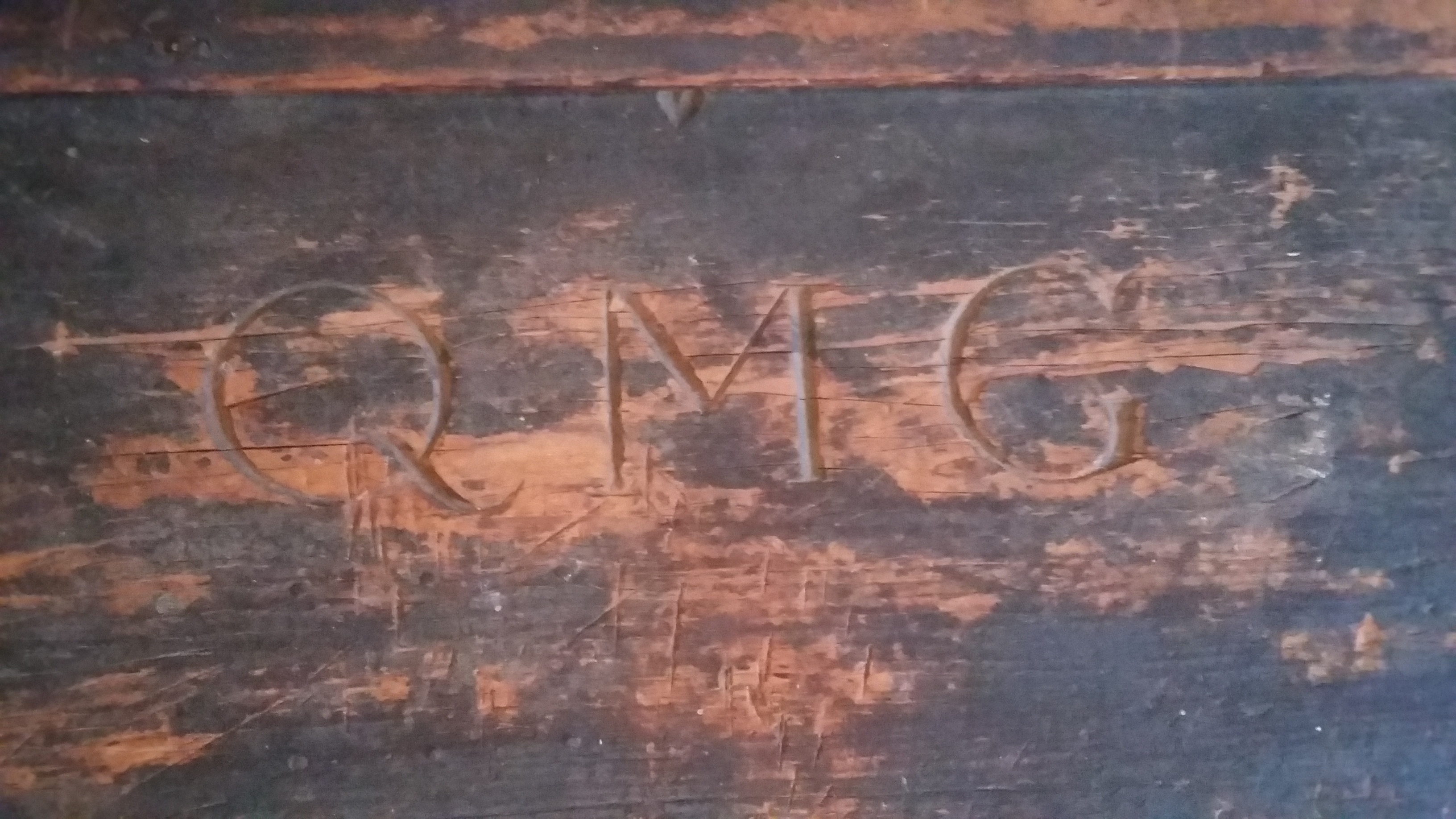 The Business of Being Quartermaster

The Quartermaster General position was enacted by Congress in 1775 with the rank of Colonel and the pay of $80.00 a month.  The position was filled by General Washington, who selected Major Thomas Mifflin of Pennsylvania to be its first General.  From 1775 to 1780, three men held the job, all with disdain and unwillingness.

The third Quartermaster General, General Nathanael Greene, disliked these new regulations, finding it lacking in manpower, funds for salaries, and was overall insufficient.  He resigned after two years, requesting Congress immediately appoint a successor instead of waiting for General Washington’s decision, to which Congress elected Thomas Pickering.  Pickering inherited a dysfunctional system with lack of funds and no unity within the staff.  Despite this and all his troubles, he held the post for 5 years (longer than anyone previously).  Following Pickering’s resignation, the post remained unfilled until 1791, and with only a few gaps during the 19th century, the post remains active till this day. 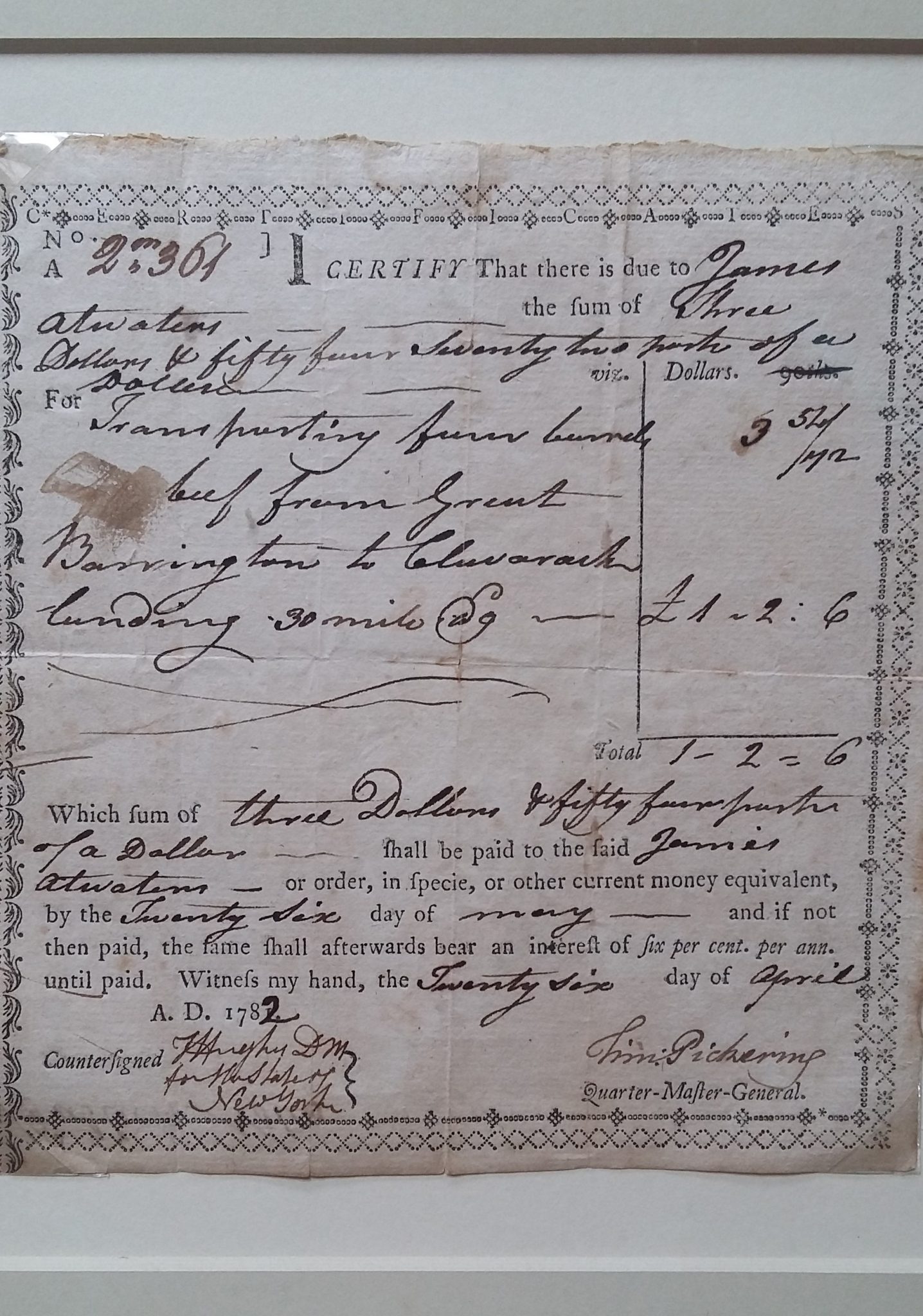 Also in our collection is a promissory note signed by Timothy Pickering and dated April 26th, 1782.  This note agrees to pay money due to a James Atwater for the transportation of four barrels of beef from Great Barrington, Massachusetts to Claverack, NY, a distance of 30 miles.  The money due to Atwater was to be paid by May 26th and includes a penalty of six percent per annum (or per year) to be added for late payment.

More can be learned about the provisions of beef and other rations that were given to the army by visiting Smithsonian’s National Museum of American History blog O Say Can You See.

Who Was Colonel Timothy Pickering?

Timothy Pickering was born in 1745 in Salem, Massachusetts.  He graduated from Harvard in 1763 and was admitted to the Massachusetts bar in 1768.  He had already been commissioned as a lieutenant in the Essex Militia in 1766, then was promoted to Captain three years later in 1769, the same year in which he first published his ideas on drilling soldiers.  His more detailed work, “An Easy Plan of Discipline for a Militia”, was published in 1775 and was used by the American Army until 1779 when it was replaced by Baron von Steuben’s work “Regulations for the Order and Discipline of Troops“.
After the war, Pickering served in Washington’s government, first as Postmaster General (1791-1795), briefly as Secretary of War, and then as Secretary of State under both Washington and Adams (1795-1800).  Visit the United States Department of State’s Office of the Historian page to read more about Pickering’s post-war career.

As a Massachusetts Senator, Timothy Pickering was prominent in the New England Federalist group, arguing for a separation of New England from the rest of the United States.  Find out more in this article, Yankee Confederates, and read about the Hartford Convention in this article from the Harford Courant.
Colonel Pickering had a World War II Liberty ship named after him.  SS Pickering launched in March of 1942, but was only in service for about a year before it was sunk by an bomb off the coast of Sicily

The Quartermaster’s Department is a great summary of the history of the department.

Check out The American Revolution for Kids for historic recipes

The Timothy Pickering Papers are held by the Massachusetts Historical Society.  For background information and a detailed description of the collection, click here to visit their website.

Timothy Pickering & the Age of the American Revolution – David McLean