The Man Who Designed the Cincinnati Eagle

He was christened Pierre Charles, but called himself “Peter” L’Enfant from the time he joined the Continental Army in 1777, aged 23, and served as a military engineer with General Lafayette. His father was a painter and he had studied art – training which he put to good use serving under Washington at Valley Forge, when Lafayette commissioned him to paint Washington’s portrait.  Check out our page Companion Engravings to learn how that painting influenced another of our Hidden Gems! 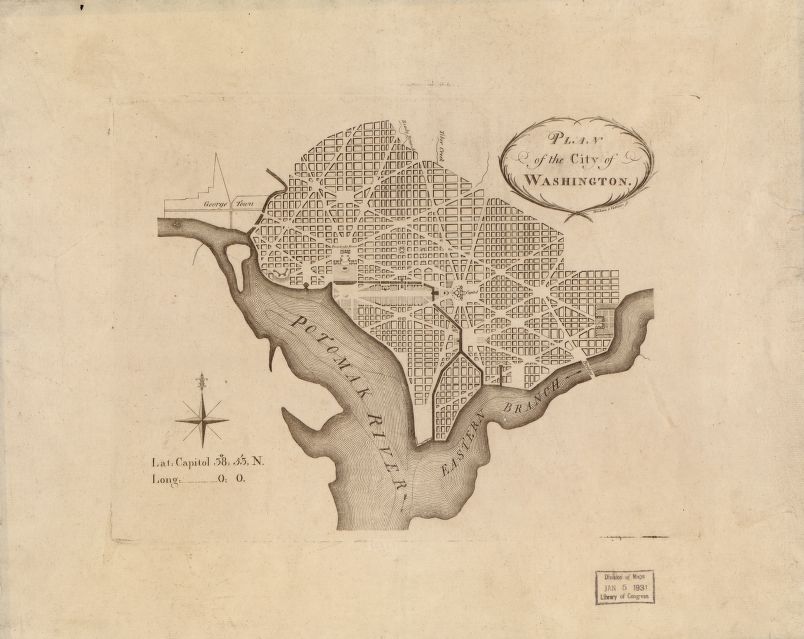 Map of Washington D.C in 1792 by L’Enfant.  Courtesy of Library of Congress, Geography and Map Division.

L’Enfant is best known  as the man who designed Washington D.C.  AS he wrote to George Washington on September 11, 1789, ‘…your Excellency will not be surprised that my Embition and the desire I have of becoming a usefull Citizen should lead me to wish to share in the Undertaking…’ once Congress had determined to create a new capital city for the new republic.  His full letter can be read here at the National Archives.

His vision for the new city embodied a vision he shared with Washington for the capital, combining open spaces with buildings ‘…to that degree of perfection required to receive the Seat of Government of so expansive an empire…’ and in 1791, Washington appointed him to design the city.  Poor relations with the three Federal Commissioners of the District led to his resignation in 1792, to Washington’s disappointment.  Mount Vernon’s ‘Digital Encyclopedia of George Washington’ tells the story in more detail, including an image of L’Enfant’s Plan.  To learn more about how L’Enfant’s plan was ‘magnified and expanded’ in the twentieth century, click here.

Prior to creating Washington D.C., he had been commissioned to redesign New York City Hall into a seat for the new Federal Government.  His design was intended to reflect the union of the 13 colonies, with a pediment showing an eagle holding 13 arrows.  It was completed in 1788: the first U.S. Congress met there in 1789 and George Washington was inaugurated as President on its balcony.  The building was demolished in 1812.  More can be read about Federal Hall and Congress by clicking here. 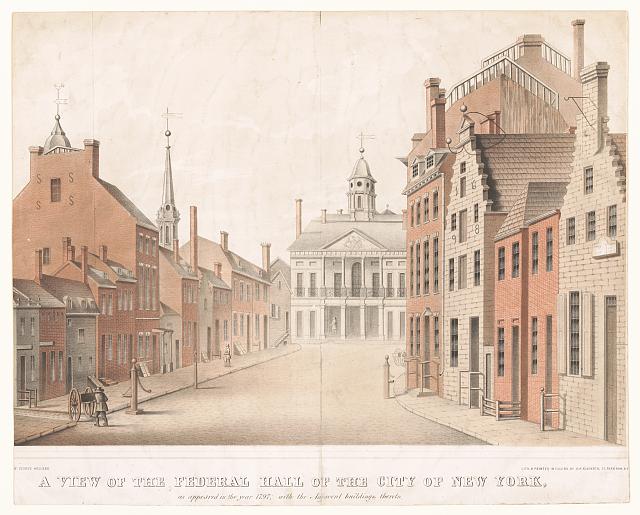 View of Federal Hall by Henry Robinson, 1797.  From the Library of Congress

After leaving the Washington D.C. project, L’Enfant was chosen as the first superintendent for a project to harness the power of the Passiac River to drive the mills at Paterson, New Jersey.  His design was rejected for taking too long to implement as well as over budget.  The replacement scheme eventually developed problems and ‘…a system nearer to L’Enfant’s plan was used after 1846.’ Read about the project – championed by Alexander Hamilton – here.

In 1814, L’Enfant worked for a short time on the construction of Fort Washington.  Unfortunately, he never prospered and died in obscurity on June 14, 1825.  He was originally buried at Chilham Castle Manor, St. George’s County, Maryland.  At the instigation of Jen Jules Jusserand, a diplomat and scholar who served as France’s Ambassador to the United States, he was reinterred in Arlington National Cemetery in 1909.  The Historical Marker Database shows his final resting place and gives details of the inscription.

Want to to Know More?